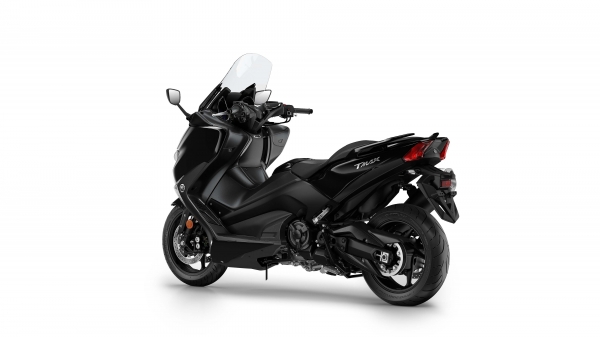 Yamaha’s TMAX scooter hit Europe in 2001, and the OG “maxi-scooter” has been hard at work transporting people and their stuff ever since. The beat goes on for 2017, with three models: TMAX, TMAX SX and TMAX DX. The TMAX is described as  a ‘blank canvas,’ for customers who want to add their own parts and accessories.  Sporting special colors and ride modes, TMAX SX is designed for sports-oriented customers. Then there’s the top-line TMAX DX, complete with extensive electronic control technology including D-MODE and Cruise Control – also an adjustable screen and heated grips and seat.

For 2017, the TMAX gets Yamaha’s Chip Controlled Throttle (YCC-T) system, making it the first ever Yamaha model with a CVT to get full ride-by-wire. Yamaha says its 32-bit ECU gives smoother response “together with a stronger and sportier feeling of power, making the 2017 TMAX an even more impressive and exciting performer.”

A new upswept muffler and a new lightweight CVT belt and pulleys also contribute towards that newfound feeling of acceleration, and a new Traction Control System (TCS) are there if it suddenly begins to feel like too much.

For 2017, there’s also a new lightweight die-cast aluminum frame and a 40mm longer aluminum swingarm “that give the TMAX owner a motorcycle-like riding experience that is beyond comparison with any other maxi scooter. Featuring revised geometry and improved mass centralization, this advanced new frame makes a significant contribution towards the new model’s 9kg [20 lbs] weight reduction.”

An all-new link type rear suspension using a horizontal rear shock absorber is designed to progressively increase damping and increase comfort and roadholding: “The combination of the longer swingarm and the progressive linkage also provides the rider with good feedback from the rear end, and the new system gives a heightened feeling of drive force during acceleration.”

Meanwhile, a new carbon-fiber drive belt let the engineers reduce the width of the belt from 40 to 25mm, driving lighter new pulleys. New tires, too, produce an unsprung weight saving of 2.2 lbs. while retaining their current sizing – 120/70-15 front and 160/60-15 rear.