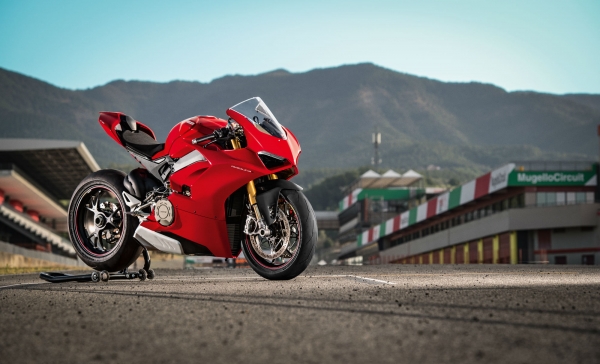 A NEW era begins’, Ducati says and, refreshingly, the PR line is not an overstatement.

The Panigale V4, Ducati’s first four-cylinder motorcycle, representing a radical departure from its V-twin tradition and indeed a new era for the Italian marque, has begun arriving in dealerships.

Production began on November 15, 10 days after the Panigale V4 was officially revealed for the first timein Milan, and 500 have now been delivered to European showrooms

The claimed 214hp V4 is derived from the Desmosedici MotoGP bike, according to Ducati. The starting price is £19,250.

Ducati said in a press release: ‘A new era begins as the Panigale V4 is delivered to European dealerships...

'The Panigale V4 is the first production Ducati motorcycle to mount a four-cylinder engine, derived directly from the MotoGP Desmosedici. It's a concentrate of Ducati technology, style and performance. With a power/weight ratio of 1.1 hp/kg, this bike sets a whole new standard in the supersport production bike segment. Developed in close collaboration with Ducati Corse, this road bike is the closest thing possible to its MotoGP counterpart.'

Visordown is due to fly to Spain to ride the 2018 Ducati Panigale V4 at Valencia this weekend, so watch out for a full review soon.